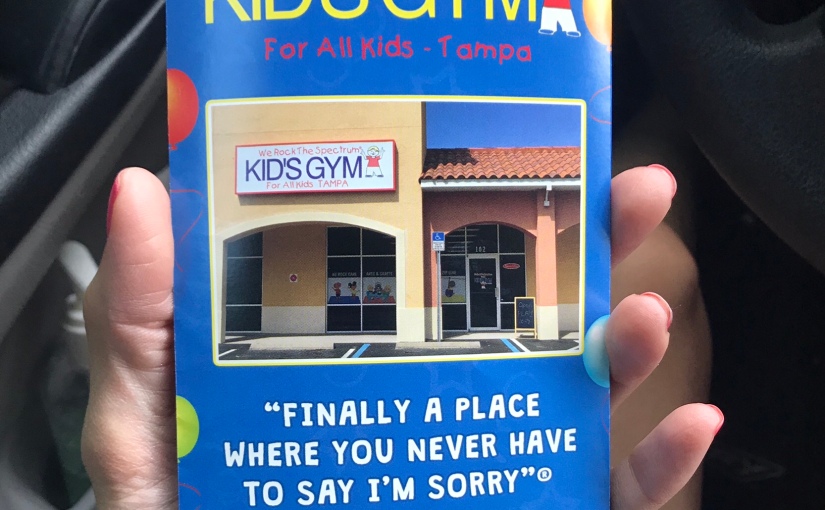 I say it again and again. But, I shouldn’t.

I don’t know why I can’t seem to stop myself.

Why do I seem to care so much about what everyone else thinks when it comes to my son’s needs?

I won’t do it anymore. I won’t apologize for me or for my son.

The sign on the all inclusive kid’s gym, ‘We Rock the Spectrum’ says it all.

“Finally a place where you never have to say I’m sorry.”

I remember telling my husband in frustrated lonely tears, before the diagnosis of autism was confirmed, that I just wanted to go someplace set up exclusively for families like us. Where Lucas could run but not escape. Where turning on and off the light switches wouldn’t surprise or upset someone. Where the only other people there would be families facing similar challenges, trying their best, alongside us. We wouldn’t have to explain anything to anyone about his behaviors. We wouldn’t have to become defensive over judgmental looks questioning why our son might have done something the way he just did, or why I let some things slide rather than “disciplining him.” A place where I wouldn’t feel so impossibly pressed to control every situation that could arise and apologize for every ‘inappropriate’ behavior.

I had read about options: sensory Sundays at Chuck E. Cheese, special screenings at movie theaters, assigned hours for special needs families once monthly at the local children’s museum, and amusement parks that give passes to make accommodations. And finally! We got to experience some great memories at We Rock the Spectrum, LEGO Land and Busch Gardens, taking advantage of their special needs opportunities. We got to attend a special needs family boating festival, where each family was chauffeured via a private boat for an afternoon on the beach! How wonderful to be accepted and not have to apologize! These individuals were all trained and educated about including families with kids with special needs. These places were like an oasis in the desert! Amazing! Fulfilling! But unique. In the regular world, we were back to feeling like we had to apologize for all the ways we just didn’t quite fit in, or the ways we made others around us ever so uncomfortable.

But, why do I apologize at all? Because I think you won’t understand him, and I think you will interpret his behaviors in all the wrong ways. And the truth is, many people do.

He needs things his way. He needs to pick the color, the path, the conversation topic. He needs preparation for a transition from one activity or room to another. He doesn’t always like to share, and he may make unexpected loud sounds. He may scream or push trying to defend what he wants, when he can’t think of the words fast enough. He may hide under, inside, or behind furniture or inappropriate places. He may throw his body on the floor, in the middle of the walkway, and refuse to get up until he has been able to regulate his senses. He may try to take large amounts of food, if it’s his favorite, without asking. He has a need to climb stairs, whenever they are in his sight. He needs to be upside down quite often. He needs time alone. He needs time with his mama to feel safe, when things are overwhelming him. Don’t take it personally, when he doesn’t look you in your face, or respond the way you hoped he would. I won’t apologize for him anymore.

He is learning. He is growing, He is trying to make sense of his world in an array of confusing social cues and sounds. What interests him might be a particular aspect of something we never even noticed. He may dwell on it, and tell you about it over and over again. I won’t apologize.

He probably won’t say hi to you or bye to you if he isn’t in the mood. He may use his iPad the whole time we attend your event. He may not look up from it for you, and then he might for the person next to you, and give them the smile you were hoping for. I won’t say sorry. Not because I’m mean. Trust me. I don’t ever want to hurt anyone’s feelings. But, I won’t keep trying to carry the weight of everyone else’s feelings on my shoulders anymore.

Thinking back now, I don’t know why I ever said I was sorry. My world was changing faster than I could control, and I wanted to stop it. But the very thing I resisted was going to happen anyway, and I was fighting all the wrong battles each time I said ‘I’m sorry,’ on his behalf. I was fighting to keep things the same, while my son needed me to just stop and see him. He needed me to stop explaining him and just love him. And I need you to do the same, because I say this with sincere love for those who really care for us. I am done saying I’m sorry, both for my son and for myself.

I am just a mom on a journey. Trying my best to do it right. Making lots of mistakes along the way. Enjoying having a community that gets it, to share it all with. View all posts by ngarcia0715